One last day, and only a short day at that. I woke up to a bit of rain, so I waited that out at the shelter. No reason to get wet if you don't have to, and only have 7 miles to go.

After the morning rain stopped I took off and finished off the last couple of miles of the FLT, crossing the Pennsylvania border into the National Forest. Unfortunately around that time it started raining again, and there was still a mile or so left to the road. I donned my rain gear, and kept going through it. It wasn't too bad, being an off and on sort of rain. 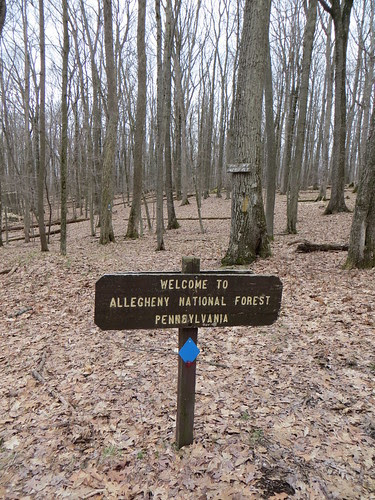 When I got to the first road crossing in Pennsylvania I was hoping to hitch a ride into Bradford, but there wasn't really any traffic on the road, so I started walking, roughly 18 miles to town. It started to pour more often than not, which severely limits the potential kindness towards hitchhikers. After probably two hours of walking through the rain a pickup pulled over and asked where I was headed. Even though he was going the other way, he offered to head back the way he came, since he described himself as a "hitch hiker wanna be." Apparently he had planned a grand trip 20 years back that never came to fruition.

On the ride into town I found out that he actually lived less than a quarter mile from the trailhead, and had gone on several day hikes with his kids on the North Country National Scenic Trail. He was also planning that when his oldest son finished high school he would hike the Appalachian Trail with his entire family. Not sure how well that will work out, but at least he was thinking about it.

Once we got into town he even let me into the YMCA to get a shower before I went to the bus station. While I was soaking wet already, it was still nice to get relatively clean as well. Unfortunately the bus didn't leave until the next morning, so I spent some time drying off in the library, then walked the 2 miles to the gas station where the bus stopped. After buying a ticket I started looking around for a place to camp for the night, and ended up right next door to the gas station. There was a fruit stand/garden store that wasn't open yet for the season. It had a large front porch area that was well sheltered from the unending rain, so I was dry for the night, and slept well for my last night of the FLT.
Posted by David at 10:58 AM No comments:

This is a Flickr badge showing items in a set called Bike touring 2012. Make your own badge here.